PEEK (poly ether ether ketone, Chinese Name: PEEK) is a semi crystalline, thermoplastic special engineering plastic developed by ICI in 1978. Due to its excellent comprehensive properties such as high temperature resistance, self lubrication, corrosion resistance, flame retardancy, hydrolysis resistance, wear resistance and fatigue resistance, peek was initially used in the field of national defense and military industry, and then gradually extended to the civil field, including industrial manufacturing, aerospace, automobile industry, electronic and electrical and medical devices. With the continuous improvement of synthesis and processing technology of PEEK, its high-performance materials obtained by chemical modification, blending and composite filling broaden its application fields. Peek is suitable for various processing methods such as injection molding, extrusion molding, molding and melt spinning. In recent years, the combination of PEEK resin with advanced manufacturing technologies such as 3D printing has made it have a new development direction in the medical field such as medical implants. 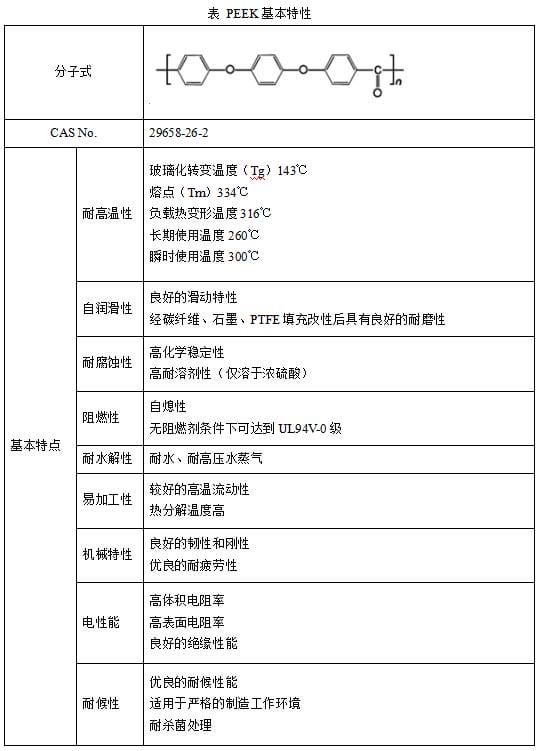 British ICI developed peek and its glass fiber and carbon fiber reinforced products, applied for patent and industrialized it, with a production capacity of 1000 tons / year, mainly used in the field of defense and military industry.

Victrex acquired peek business from ICI, showing a monopolistic development trend and constantly expanding its production scale. In 2003, its production capacity increased to 2800 tons / year, and its application fields also expanded from military to civil fields such as industry and biomedicine.
Because PEEK is mostly used in military field, weggs blocked it. With the strong support of China's policies, Professor Wu Zhongwen of Jilin University independently developed PEEK patent technology with independent intellectual property rights, and established and put into operation the Jida Hi-tech Materials Co., Ltd. Jida Hi-tech became the first company to break the monopoly of Victrex.

The existing peek synthesis processes are mainly nucleophilic substitution reaction and electrophilic substitution chemical reaction. The electrophilic process was prepared by low temperature reaction of diphenyl ether and m-phthalocyanine chloride. It has the advantages of mild conditions and convenient source of raw materials, but there are many side reactions such as polymer branching and crosslinking. At present, the first kind of nucleophilic process is the main industrialization in the world.

The basic idea of nucleophilic process is that 4,4-difluorobenzene and hydroquinone as raw materials, in the presence of anhydrous sodium carbonate, diphenylsulfone as solvent, protected by nitrogen, and gradually heated to the temperature close to the melting point of polymer (320 ℃), high molecular weight peek was obtained. The advantages of this process are that the side reactions such as branching and crosslinking of polymers are easy to control, and no metal based catalysts, stabilizers and additives are used in the process. High purity peek powder can be produced. However, this route has some disadvantages, such as harsh reaction conditions, complex synthesis process, expensive monomer and high cost. 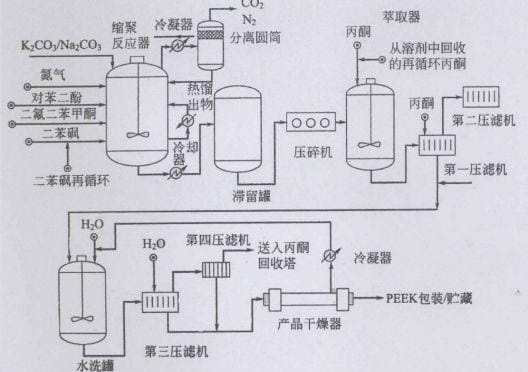 Over the years, all mainstream manufacturers have carried out further research and development and improvement, overcome disadvantages and reduce costs based on the basic idea of nucleophilic process, forming their own core process routes, which is also the core value technology of PEEK synthesis industry.

As a representative of thermoplastic engineering plastics, PEEK has the characteristics of easy processing. It is suitable for conventional plastic processing, including injection molding, extrusion molding, molding and melt spinning. In recent years, with the continuous development of 3D printing technology, peek, as a representative of 3D printing polymer materials, has expanded its application in the field of medical devices, especially in medical implants with complex morphology and structure.

With the development of processing technology, along with the improvement of market requirements for material properties, the modification and compounding of PEEK has become a hot spot of industry development in recent years. In addition to the chemical modification by changing the composition and / or proportion of the main chain of the polymer in the polymerization stage, the common performance improvement methods in the industry include surface modification, blending modification and composite filling reinforcement, etc., and at the same time, the molding processing performance and service performance of PEEK are improved. 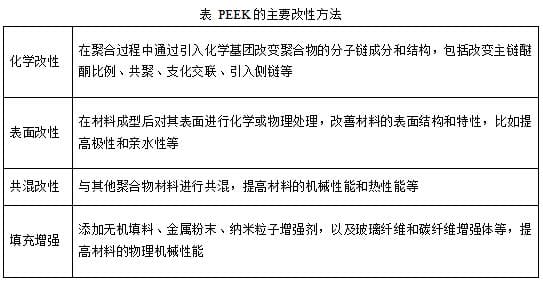 PEEK has excellent comprehensive properties and can replace traditional materials such as metals and ceramics in many special fields. Peek has been applied in machinery manufacturing, aerospace, automobile industry, medical, electronic and electrical, pharmaceutical and food processing industries, among which transportation industry (including automobile and aviation), machinery industry and electronic and electrical industry account for the highest proportion. 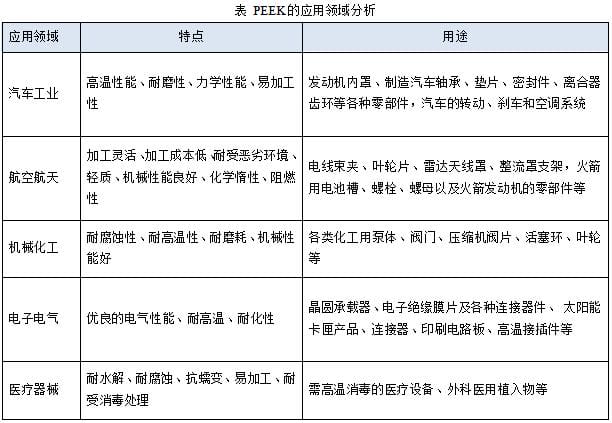 After more than 40 years of application and development, peek's product types, participating enterprises and application fields are constantly expanding, maintaining a high industry growth rate. However, due to its high price, it occupies less market share in special engineering plastics. For many years, the mainstream enterprises in Europe and the United States have been expanding their application scope and finding a way out through the combination of M &amp; A and independent development (or cooperative development), relying on expanding the production scale to produce scale effect, actively developing modified and composite new products, and through the cooperative development of downstream industries.

Although there are independent research and development technologies for peek synthesis in China, the problem of high raw material cost of PEEK has been solved to a certain extent. However, compared with developed countries, the development of PEEK industry chain in China still lags behind that of developed countries, especially in the development of downstream application of high added value, it is difficult to occupy an advantage due to the limitation of overall industrial manufacturing capacity. With the development of China's large aircraft, rail cars, automobile industry, medical and national defense industry, the demand for special engineering plastics represented by peek is also increasing, especially in improving the production and processing capacity of high-performance products.